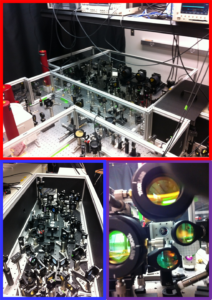 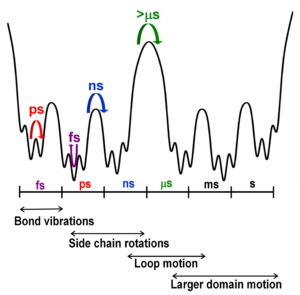 Infrared (IR) spectroscopy directly probes the structural degrees of freedom of a molecular system with chromophores as small as a bond to provide spatially resolved information about protein microenvironments. The fast timescale associated with IR transitions ensures detection of even rapidly inter-converting species and conformational heterogeneity that could be potentially important for protein function. Our group incorporates IR probe groups at specific locations in proteins and uses IR spectroscopy to characterize the local environment.

The linear IR spectrum of the IR probe reflects the number, nature, and heterogeneity of the conformational states that it experiences in its local environment.

2D IR spectroscopy can rigorously correlate the probe frequencies and directly follow their evolution in time. The time-dependent change in lineshapes reflect the dynamics of the frequencies of an absorption band, which in turn reflect the fluctuations of the environment surrounding the probe (i.e. the interconversion among conformational substates). 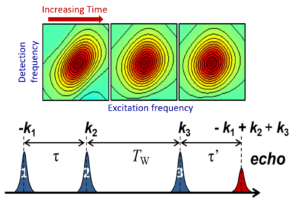 2D IR spectroscopy involves application of three ultrafast pulses to the sample and heterodyned detection of an emitted 3rd order signal. 2D IR spectra correlate the frequencies before and after a waiting time (Tw)